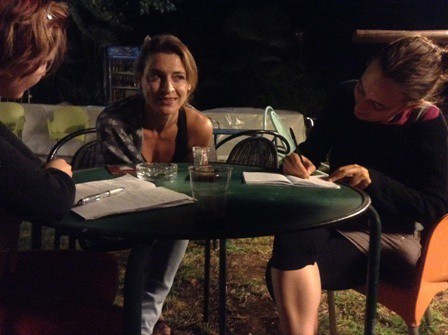 Lia Haraki, Cypriot dancer and choreographer, is at B.Motion 2013 with her The shape of necessity, duet performed by Christina Patsali and Petros Konnaris: it is a work which develops the theme of identity in an uncommon way, focusing in particular on the relationship with the other. We met Lia after the show, asking her about the treatment of this theme, the working process and the development of her research; the interview was an opportunity also to know more about the scene and the dance system of Cyprus: Lia Haraki’s perspective will be published during the next days, together with other points of view from the cypriot artists which are present at the Festival.

First, we’d like to ask something about your work, which reflects on identity themes, on the individual and on the relationship with the other. Why did you choose to work on this theme?
Actually this piece was created as a result of a research I’ve been doing on repetition in a solo work that I’ve also presented this year in the Venice Art Biennale as a performance art work. It was how to create from intuition, which for me has to do with creating from a place that you know without mentally knowing. So I focused a lot on the heart body part rather than the mind: not to think about the movement, but to be the movement since it is what it is there and then without doubt.
The solo was 40 minutes long and is called Tune in. There was no choreography, there was only me having one task: to go right and left. In this right-left motion I trusted in what came: I didn’t plan and I didn’t think – I was.
So Tune in was quite successful and I think people appreciated the honesty, the vulnerability and the exposition – because it was very risky. Then I thought that I’d like to experience this with another person. I wanted to create a duet, not on me, but with other people; and I said Ok, what is on the other side of intuition, it must be: well structured and thought out form! So, I went from the formless to the formed: the challenge was through well structured form to be able to be the movement once more rather than thinking about it, and eventually deconstruct it to pure improvised repetitive motion that becomes emotion, like in the last section of the piece .
I chose this idea of a man and a woman, which can be very cliché and I tried to deal with this challenge of how can I make a duet that is not romantic, that is not stereotype – or it is, in a way that I’m not bothered.
I wanted to have these bare bodies, raw, to go trough all these different states. I did not have a plan, for me the process is also about the chemistry of the company – is not just me, is together with the collaborators.

The shape of necessity – photo by Pavlos Vrionides

During The shape of necessity the performers seem very simmetric…
The idea is that you need the other person to balance. It’s an ideal situation, but it’s also what unconditional love could look like. And in a state of love, you absolutely trust, if it’s unconditional: you accept, you respect whatever is there, without judgement and doubt.

How do you work with the performers in the creative and choreographic process?
I went in the studio and I said whatever was my need on the day – for example that I have a need for pelvis movement today: How do you feel about this? (she smiles, ndr)
As I’m getting older – I’m 38 now – I am less and less interested in a plan but more i try to listen to what is there today, because otherwise it’s science or mathematics, and for me it’s not art: art is about the unknown possibility that is there in order to be discovered.
So we had no plan: we went there and we said all our needs, because when something is a need then you feel you want to be at service to this beautiful thing whatever it is. So then you do and it becomes practical and you are at service to a trully creative process not to a business plan.

How long have you worked for this piece?
On and off, about three months.

Do you think you will develop more this research?
I am now making a piece as part of the ‘Act your Age’ EU Programme with 2 older dancers. Its called ‘Changing Skin’ and it is about courage that comes with aging.
Later i want to create a group piece of 5 naked people based on the Shape research, because we have many ideas we did not explore. About this nakedness, I want to go over and explore more the body, particularly where matter meets no-matter, where form meets formless; where the soul becomes flesh and vise versa, something to do with our energetic body and our connection to the devine.